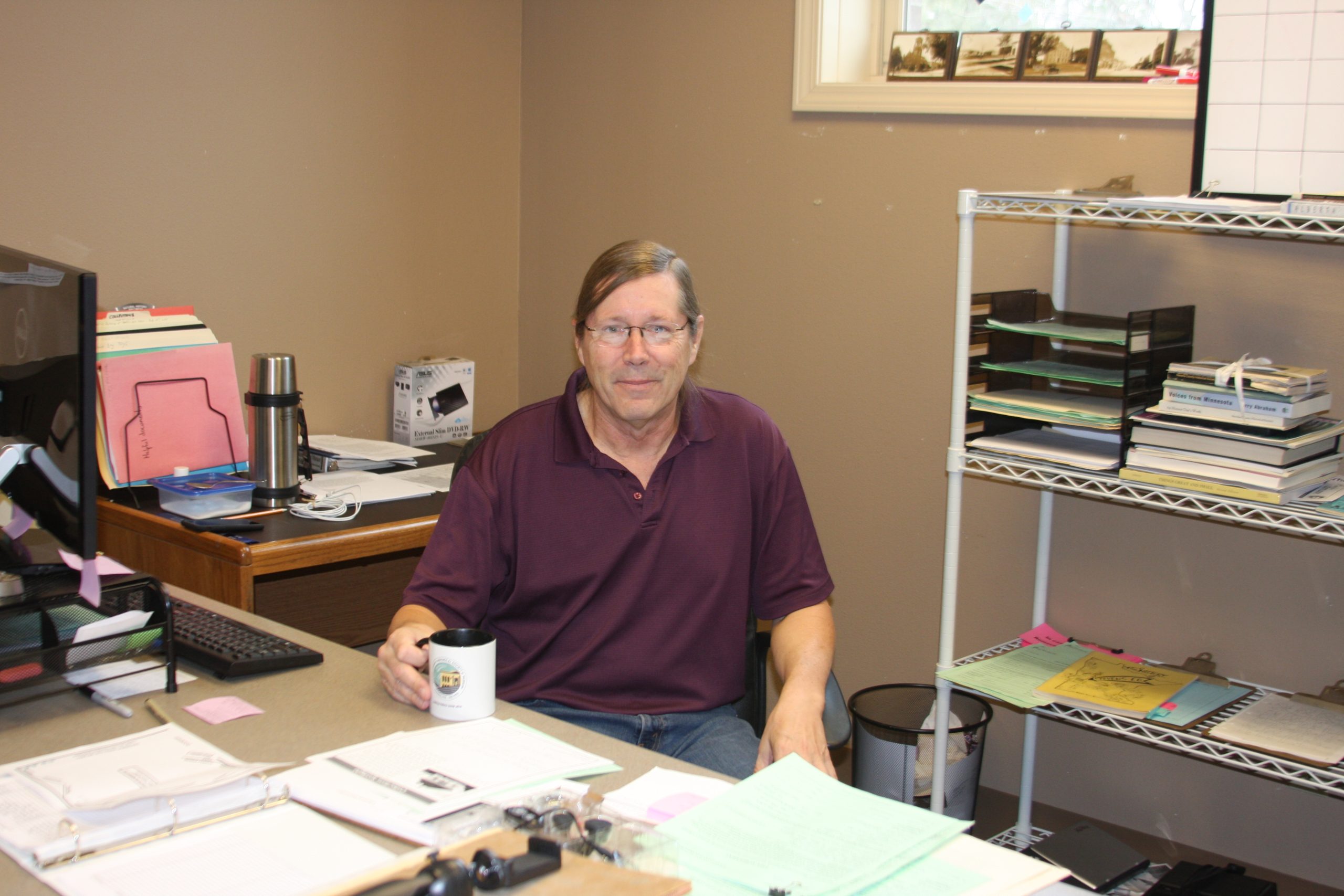 People who love history are not living in the past but learning from the past. They enjoy hearing old stories, seeing antique items and exploring ancestry. They just can’t get enough of what they see and hear from our history.

The best place to learn about history is at a local museum and the person who makes sure you can have a good experience locating items is the Curator. The Curator is the keeper or custodian of a museum. They investigate, interpret, collect and arrange information of objects and people from the past.

The Stevens County Historical Society recently hired Bill Eckersen as the new Curator. Eckersen is a well-known voice in this area having worked at KMRS radio station for 42 years. With a desire to make a change and his love of history he decided to try a new career at the museum.

He terms himself as a ‘military kid’ with his father serving in several parts of the country. However, when his dad was sent to Vietnam, Bill joined his mother in Clinton, MN where her family lived. From there the family moved to California and then Plymouth, MN where he finished high school.

Bill decided to return to West Central Minnesota and attend college at the University of Minnesota Morris. He studied there from 1975 – 1980 and majored in History. After college he started working at the radio station as an overnight announcer. Through the years he held various positions and shifts at the radio station but when the station changed to an programmable automation system and as technology evolved he was asked to do different jobs. He had taken some courses on computers so the change was handed over to him. The station used four different systems during his time there.

For the next 42 years he worked under three different radio station ownerships and with several different people. He did pretty much every job except selling advertising or covering sports. This experience helped prepare him for his new job at the museum.

Museum director Cam Erickson explained how Bill came to be hired at the museum. “Since May he would come to the museum on Wednesday afternoons to tape our “Museum Moments” for the radio spot we do. One day in late July we were talking about all the openings/changes of employment in different places in our community and he mentioned that he wasn’t with the radio anymore. I asked what he was going to do now, as he doesn’t seem like the sit around type. He said “I don’t know, maybe get a job at Willie’s”. That’s when I said “how would you like to be our Collections Manager”.  When it came out of my mouth I was sort of kidding, but then after I said it, I started thinking about all the valuable assets that Bill would bring with him such as interviewing, video editing, writing, etc. and suddenly I was getting more serious about it. Luckily the job was intriguing to Bill and it all worked out.”

Bill started at the museum on August 31. One week later, he was asked to use his “radio voice’ as the announcer on a Rendsville Township bus tour. He loved interacting with the people and sharing the history. Erickson added that Bill picked up the concept of the collections and database very quickly and is doing a great job.

Bill is also preparing for a special year long exhibit to open next year. The new exhibit will focus on the 70s so he is researching agriculture, world events, national events, sports, fashion, entertainment and more from this decade. Since Bill was attending UMM in the mid 70s, this has definitely piqued his interest. The exhibit is planned to open in January 2023 and be open for one year.

There will also be several mini exhibits during the year at the museum. A Cherrywood Challenge Display will be November 8-17 with a reception on Saturday, November 12 from 10 a.m. to 2 p.m. This will be replaced after a brief time by something new.

When not cataloging and photographing artifacts, Bill is simply just trying to get a handle on the inventory and the regular things that need to be done. He is thoroughly enjoying working with Cam Ericksen, director, and Tyler Marran, receptionist at the museum. There are also many volunteers who are very important to the work being done there.

“They have been very welcoming and helpful in getting to know the system here,” Bill explained.

He  has enjoyed seeing the many things at the museum and the new items that come in regularly. He recently found two old coffins and a body basket that was placed in the collection room. These types of things pique his interest and make him want to learn even more about our history and what was considered routine back then.