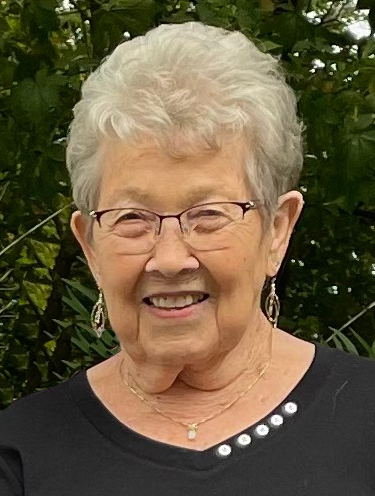 Lenore Esther Kaley was born in Morris, Minnesota, to Carl and Esther (Leuthard) Wade on October 16, 1931.  With her little round face, her Dad lovingly called her “Ole” and the name stuck throughout her life.  Ole was raised on the family farm near Chokio, where she was baptized and confirmed at St. Mary’s Catholic Church.  She received her education in Chokio, graduating with the high school class of 1949.  Following high school, she moved to Minneapolis to attend the Franklin School of Nursing and obtained her LPN degree.  She moved to Granite Falls for a short time before moving back to Chokio.  At a local dance, she met William Kaley, a young man from Chokio.  The two began their courtship and were married one week after her 20th birthday, at St. Mary’s Catholic Church.  They made their home on a farm near Chokio and started their family, welcoming five daughters.  They made their home on the farm until 2005 when the couple moved into Chokio and then in 2020, they moved to Alexandria to be closer to family.

Lenore was a member of St. Mary’s Catholic Church and was active on the Ladies’ Guild.  Ole was a very social being, she was very generous of her time and loved making connections with friends.  She and Bill wintered to Florida for 25 years and she was very active in the Ladies’ golf league and bridge club.  She continued these friendships and many others for years, and also had many ‘telephone friends!’  Most of all, Ole cherished all the times that her family came to visit, and her daily coffee and treats with Bill.

In lieu of flowers, memorials are preferred to the Courage Cottage, the Arthritis Foundation (www.arthritis.org) or the charity of your choice.  Pedersen Funeral Home in is care of arrangements for Ole.  To send condolences to the family, on-line, visit www.pedersenfh.com.