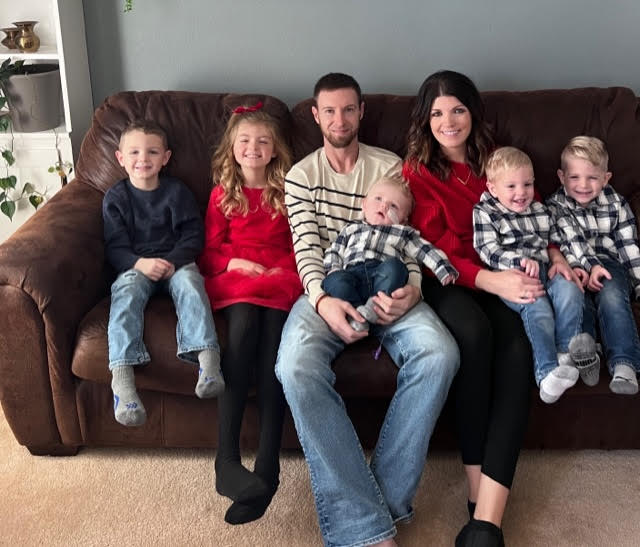 The word mighty is not typically associated with a baby, but then you may not have met baby McCoy Jipson. If you did, and heard his story, you would agree that he is a mighty warrior. He has been poked and prodded, undergone two surgeries, many days in the hospital and is still fighting to learn things that a normal 8 month old should already be doing.

McCoy was born on May 3, 2022 in Morris. His parents are Andrew and Kendra Jipson who live in rural Graceville. Andrew teaches physical education at Morris Area Schools and St. Mary’s school. Kendra owns a hair salon in Graceville. He was welcomed home by siblings Mia 8, Dawson 5, Cash 4 and Scout 2. After several weeks at home with the new baby, Kendra went back to work with the three youngest going to daycare.

On September 13, 2022, Kendra got the older children off to school and brought the younger ones to daycare. She went to work and at noon went home for lunch. She was only home for a little while when she got a call from the daycare provider that she was taking him to the emergency room because he was having difficulty breathing and was acting lethargic.

Kendra called Andrew who also left work and headed to the hospital. When she arrived a nurse was holding him. His heart rate was very low and so was his oxygen level. The doctor was on the phone with Sanford Health in Fargo arranging for a helicopter to take McCoy there.

Kendra rode in the helicopter with McCoy and Andrew drove to Fargo so they would have a car there. They were conversing back and forth and also with doctors. Once in Fargo McCoy, who was pretty lethargic, underwent an MRI and cat scan. The doctors then told the parents that he had suffered from non accidental abusive head trauma which resulted in subdural hematoma.

He had a brain bleed towards the back of his head and bleeding behind the eyes. He was having seizures every 20 minutes so he was intubated and given stronger seizure medication. He continued on the medication for a few days and then doctors tried to wean him off. However, the seizures would return. He remained intubated for 8 days and each time they tried to take away the medication, the seizures would return. Eventually they were able to do a slower wean until he was seizure free.

McCoy then underwent more x rays, MRIs and scans. The damage to the back of his head was severe and there were ruptured blood vessels behind his eyes. The doctors ruled out a fall or being dropped as there were no broken bones or bruises on his body. He remained at the Fargo hospital for 18 days and was slowly taken off the pain meds. Kendra said it was on the 15th day when she finally heard him cry again. He was starting to respond and let them know he was not happy with what was going on.

On September 30, McCoy went home. Before making that trip he had to re-learn how to drink a bottle which had to be fed to him in a special position so he wouldn’t choke. The feeding tube was left in so that medication could be administered that way. He was continuing to get some anti-seizure meds.

Things were going well until Andrew and Kendra took him to his first therapy session in Morris. Kendra had been noticing something different and when it happened in therapy, he was sent to the ER in Morris. From Morris they went up to Fargo and McCoy was hooked up to an EEG machine to monitor seizures and while hooked up, underwent another episode. The EEG machine showed it was not a seizure, and the doctors ruled these episodes as abnormal involuntary muscle movement. They went home, only to return to Fargo again on October 16 as the episodes had gotten more severe and he was readmitted to the hospital and a longer 48 hour EEG study was done.

McCoy was sent home and was scheduled for a follow up MRI in Fargo in late October. That MRI showed that the blood in the brain was not dissolving and fluid was building up. On Halloween, October 31, McCoy underwent brain surgery. Tubes were placed to drain the fluid and old blood. He was also given a blood transfusion to supply new blood to his body. He spent a week in the hospital until doctors felt he was good enough to go home.

The episodes decreased but McCoy continued to have rapid eye movement. On December 5, he was sent to Children’s Hospital in St. Paul for eye surgery to remove the excess blood behind the eyes. This needed to be cleared so that the brain would continue to send signals to the eye.

In January, McCoy once again started therapy, both at home and outpatient. He is doing physical and occupational therapy. He is 8 months old but still not able to do things like roll over, control his head or grip things with his hands. Normal activity is very slowly improving but Andrew said that McCoy would probably be 3 years old before they will know the full extent of the damage.

Doctors are telling them about the damage in the brain but said that the brain is sometimes able to reroute around damaged areas. Andrew and Kendra are very hopeful that Mighty McCoy will continue to improve.

When McCoy was first in the hospital Andrew called his fellow employees to tell them about what happened. In one of the phone calls, Darcy Winkelman said “he is a mighty little guy.” The word mighty has stayed with him.

The Jipsons have had a lot of help throughout, especially with their other four children. Andrew’s mom, Donna, and sister Amy Jahnke have stayed at the house multiple nights. His sister-in-law Sherry Jipson picks up the children to take them to school. Andrew’s dad, Dennis and his wife, Dee, have helped a great deal. Kendra’s parents, Mike and Lori Gaulrapp, live in Breckenridge and will take the younger boys when they are in Breckenridge at therapy. Kendra’s mother suffered a stroke one year ago so is unable to help a lot, but her dad will do what he can. McCoy also has one great grandmother, Carol McRoberts.

So many people have brought food, gifts for the children and made countless offers to help. Kendra is no longer working at the hair salon and Andrew is taking time off for now but planning to go back to work as soon as McCoy shows more improvement. Kendra said it would be very difficult for her to leave her children again in order to go back to work.

Some of their friends have now organized a benefit to help the family with lost wages, medical expenses and trips to the hospital or clinic. It will be held at the Morris High School on Saturday, January 21. There will be a silent auction, meal and many opportunities to help defray costs. There is a fund set up at Star Bank in Graceville. The benefit organizers are Abby Weick, Amy Kehoe, Lori Fehr, Chelsey Oachs and Amy Jahnke who you can contact with any silent auction items. You can also contact them at mightymccoy@twistedplays.com.

Andrew and Kendra have so many people to thank through all this. They are so appreciative of Nurse Practitioner Jessica Kleindl in Graceville, nurse Deb Walters and the entire staff at Sanford Health and the Children’s Hospital PicUnit in Fargo. Andrew especially appreciated Dr. Perkins in Morris who continued to text and call him every day throughout McCoy’s journey. The three Apostolic Churches in the Morris area have been very supportive and gave the family some financial relief when it was badly needed, along with many community members in the Morris and Graceville areas.

“Having some relief from worrying about finances helps a lot,” Andrew stated. “We don’t know what is ahead but this support helps.”