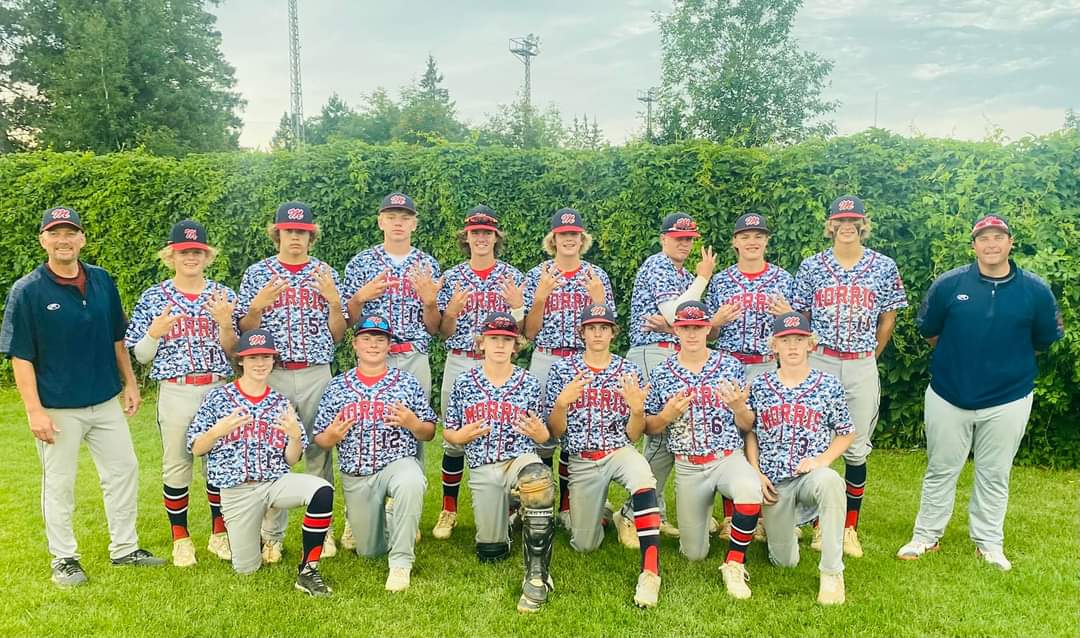 The Morris Junior Legion baseball team finished 1-2 at the Minnesota Division II Junior Legion State Baseball Tournament this past Thursday and Friday, Aug. 4 and 5, in Ely.

Morris closed out the year 15-10 overall, two wins better than their 2021 season of 13-9. The 2022 season was their second state appearance in five years as the team punched the ticket back in 2019 as well.

Morris had a valiant effort, coming back from a four-run deficit, but came up short, falling to LeSueur-Henderson Thursday, Aug. 4, in the opening round of the Minnesota Division II Junior Legion State Baseball Tournament, in Ely.

Morris trailed early as LeSueur went up 2-1 after one and 3-1 after two innings.

Morris was able to trim the deficit to 4-3 after two runs scored on an error and passed ball.

In the bottom of the seventh, with two outs, Kaleb Breuer knocked in Andrew Marty and John Kleindl connected on a two-run pop fly to left field, but Morris could get no closer.

Morris had 11 hits in the game. Asmus went 3-for-4 at the plate to lead Morris. Kleindl had three RBIs with two hits.

A bases loaded walk gave Sleepy Eye its first run of the game and the second run was scored on a passed ball in the second inning.

Sleepy Eye made it 5-0 with three runs in the sixth.

In the seventh, Ozzy Jerome got Morris on the board, scoring on a wild pitch. Andrew Marty scored on a single by Riley Asmus.

Jackson Hallman tossed his first no-hitter of the season in an 11-0 rout of Hayfield Friday, Aug. 5, in Ely.

Hallman went five innings, walked two and struck out three in the win that was powered by an errorless Morris defense and a hungry Morris offense.

In the first, Riley Asmus scored on an error and Kaleb Breuer scored on a ground out to give Morris a quick 2-0 lead.

After Hallman sent the batters down in order, Morris added two more runs in the second thanks to an error and an RBI double by Asmus.

Riley Asmus went 4-for-4 with a double and a triple to help lead Morris to victory. John Kleindl, Gibson and Hallman added two hits each.