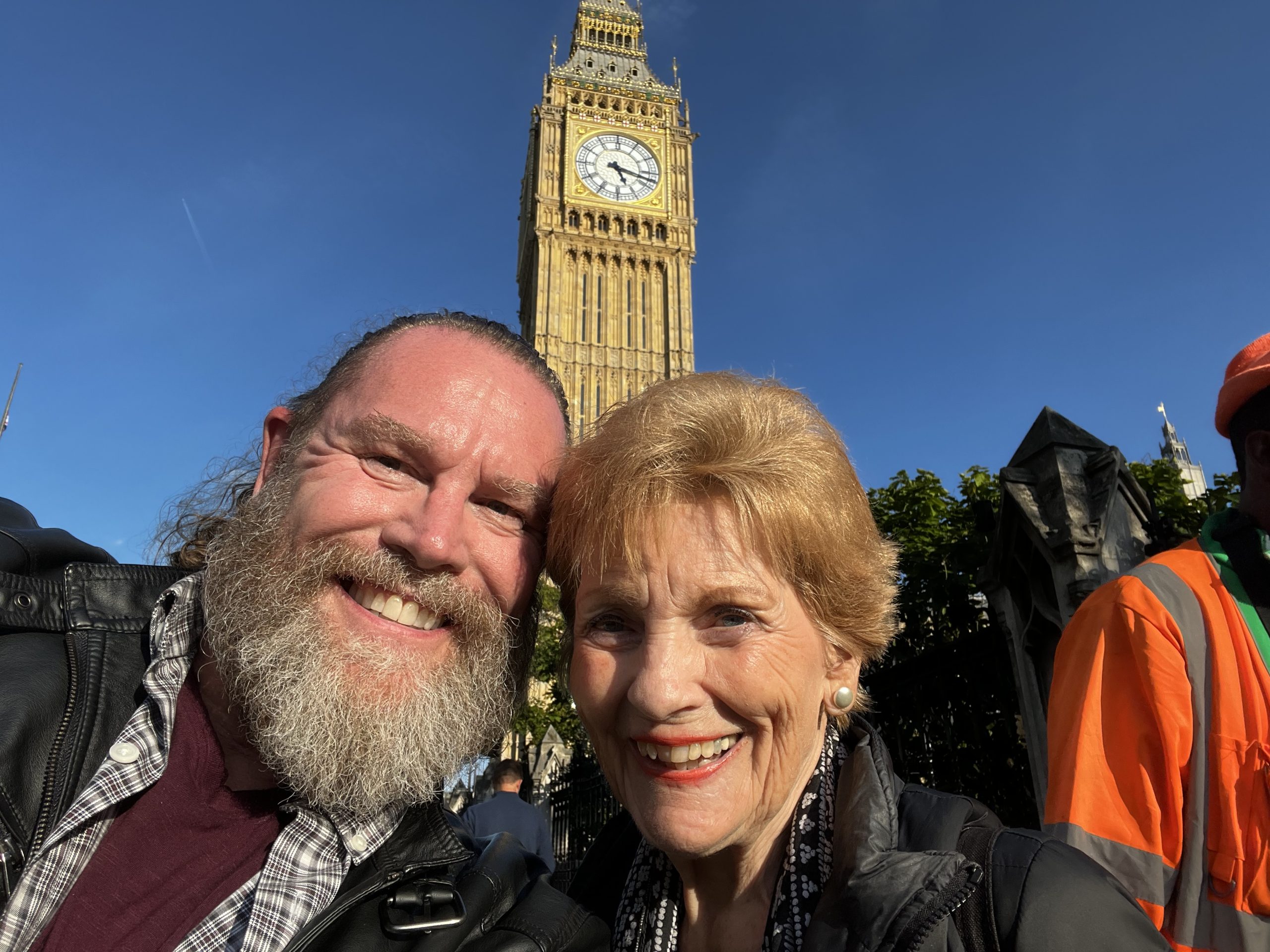 Morris man is first American in line for Queen’s viewing

Standing in a queue, or line, for 29 hours to spend 30 seconds beside the casket of Queen Elizabeth was so amazing and ‘totally worth it” for Andrew Israels-Swenson of Morris. He was the eighteenth person in that queue and sat, fortunately on a bench through rain and other weather conditions, for all of that time.

When Andrew heard that the Queen was ill he knew he needed to attend the viewing and watch the funeral. It was something he had to do for his mother and her sisters, who grew up in England. They were born in Swindon, England which is 70 miles west of London. His mother, Ann Israels, met her future husband there when he was serving in the United States Air Force. The family moved to his home country in the ‘60s but when he was stationed in Asia, they returned to England to live with her family. Andrew and his siblings actually went to school for several years in England.

The family eventually returned to the states and Andrew ended up in Morris, Minnesota 17 years ago. His mother recently also moved to Morris. They make regular visits to England and her hometown, however, during Covid those visits were halted. This year they were planning a spring trip but this was accelerated when the Queen died.

Andrew had a feeling that the Queen was not well so was semi-planning to move the trip up. His mother was so upset and cried when hearing the news of the Queen’s passing. He asked his mom if she wanted to make the trip to attend the viewing. Knowing that this might involve long lines and lots of waiting she declined.

He then booked flights, which were very overpriced, but used his miles to defray the cost. He decided to spend a month there so he could also visit family and a cousin who had recently been in the hospital. When checking out hotels, again the prices were very excessive so he booked a stay at a Youth Hostel. This is something he did in the past and felt comfortable with.

He arrived in England at the time that the Queen was lying in state at Balmoral Castle. She would be returning to London the following week. Andrew heard that they were giving out wristbands at 11 a.m. so he walked the two miles to an area near Westminster to get one. Unfortunately he had the day wrong but decided to wait because he had a spot in the line with a bench. He was one of the first 20 people in line. When he received his wrist band, number 18, he realized that the location was perfect. There was also a ‘loo’ nearby. He literally thought he had “won the golden ticket.”

The day before the reviewal, he took his place in the queue. He met an 86 year old woman from Holland named Truuse and they became instant friends. For the next 29 hours, this would be his home as he met and visited with so many people from all over the world. He was the first American in the line. That night it rained for eight hours. He and Truuse took turns returning to their rooms to get umbrellas and dry clothes. They were visited by the Mayor of London and the Archbishop of Canterbury. They also spent time playing games like ‘spot the sniper’ but had to be careful not to point. They were also interviewed multiple times by reporters from all parts of the world. Andrew learned that he made local news when his friends started to text him.

After 29 hours of waiting, the time finally came for their chance to pay their respects to the Queen. They were led across the Lambeth Bridge at around 1 p.m. shortly after the Queen’s family spent their time. They were led to a door at the back of Westminster and Andrew stated that this was ‘mind-blowing’ as he realized the Queen and her family were right on the other side of that door. The group that now became friends entered together, walked up a flight of stairs and then down another flight.

He offered his arm to Truuse and they then came face to face with the casket of the Queen. Andrew expected it to be much more elaborate but instead it was very simple with guards, flags, a few flowers and then the crown resting on the top. As he walked past the casket, he thought “this is for the Jones girls of Swindon” indicating his mother and her sisters. He also kept thinking “don’t trip or fall to embarrass all of America.”

Then they were directed out the front door of Westminster where six of them hugged and thanked each other, promising to keep in touch. They were also accosted with reporters and more interviews. Andrew said that even though it was less than a minute, it was worth every second of the time.

He returned to his Hostel and waited for the funeral. Here again he got up very early and walked to Buckingham Palace. Many of the streets were blocked off so he had to take a different route and ended up getting lost. However, he eventually ended up on the Mall across the street from Clarence House where the family gathered before going to Westminster for the funeral. He was in the third row from the front with people 50 deep behind him.

He had a very good view of the funeral procession and was very close to Prince Charles and his family as they passed. Even though he was extremely tired, the experience was ‘surreal.’

There were some really amazing moments during the parade too. He recalls a flock of six geese flying through the street in front in perfect formation. There was a two minute time of silence and it was heart-rendering as all noise stopped in this busy city. Just before that time was up, a pure white bird flew over the crowd which was breath-taking.

However one of the most heart-rending experiences was when the crowd sang “God Save the Queen” for the final time. Many people were sobbing as they sang or heard the words. It was a tribute of great respect for a wonderful Queen

Andrew remained in England for a few more weeks and visited family and friends. It was surprising how life went on and people continued on with their lives. On his final morning he walked to Westminster and later to an area where all the flowers and messages were taken. He was surprised that there were no flowers in Westminster.

He returned home to Morris and shared his experience with his mother. She was so touched that he thought of her and her sisters while beside the Queen’s casket. Growing up during post World War II England, she never thought the queen would ever hear of her so this simple gesture meant a lot to her.

Andrew stated that he plans to make his visits to England a little more regular and maybe even connect to some of the new friends he made during those 29 hours in a queue in London. He is already trying to arrange a trip during the coronation on May 6, 2023.

When asked what he ultimately gained from this he said “I didn’t know that I would ever have a front row seat for history.”