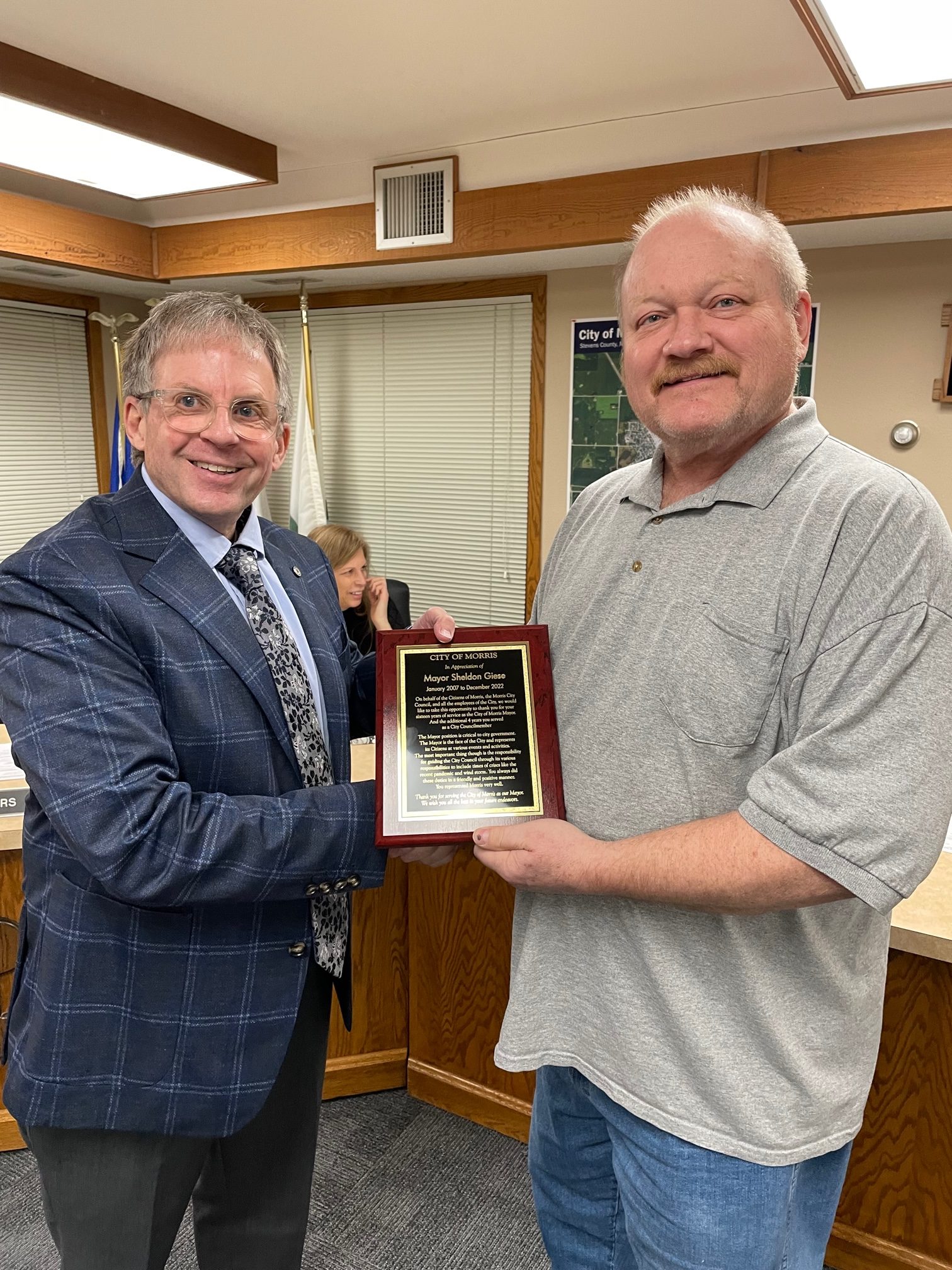 There was a lot of formality, oaths, applause, thank yous and handshakes as Kevin Wohlers assumed the duties of Mayor of the City of Morris. Former Mayor Sheldon Giese called the meeting to order before handing over the gavel to Wohlers.

Before assuming the Mayor position, Wohlers officially resigned as a council member and the council members declared a vacancy. They will now have 30 days to fill that position.

City Manager Blaine Hill also had a presentation for former Mayor Giese. He presented him with a plaque that stated “On behalf of the Citizens of Morris, the Morris City Council, and all the employees of the City, we would like to take this opportunity to thank you for your sixteen years of service as the City of Morris Mayor. And the additional 4 years you served as a City Councilmember. The Mayor position is critical to city government. The Mayor is the face of the City and represents its Citizens at various events and activities. The most important thing though is the responsibility for guiding the City Council through its various responsibilities to include times of crises like the recent pandemic and wind storm. You always did these duties in a friendly and positive manner. You represented Morris very well. Thank you for serving the City of Morris as our Mayor. We wish you all the best in your future endeavors.”

Wohlers also made a statement upon assuming his duties.

“I want to begin by saying how truly humbled I am to be standing before you as the next Mayor of Morris. I appreciate the support the citizens of Morris have declared in my abilities to represent the interests of this great community. I want to take this opportunity to say thank you to Mayor Giese for his 20 years of public service. Sixteen of those years were as Mayor.  His commitment to our community is commendable. It’s been a pleasure working with you.

Wohlers then said that he did some research at the museum about past Mayors. He found that in 1872 the community was led by a president. This continued until 1903 when that title was changed to mayor. There were 13 people who served as president and 23 as mayor.

“My commitment to the community of Morris is that I will strive to be a “good” mayor.” Wohlers went on to say. “I’m fortunate to have a very good city council. All of the members on this council each have unique skill sets. It’s my job to draw out the best of each and every one of you. We are also fortunate to have an experienced city manager. I look forward to working with city manager Hill as we enter the New Year. We have accomplished much over the last 10 years since I’ve been on the council. But with all of us working together we can accomplish much more.

There are several ways that the city council members can fill the vacated seat. They have let the public know that there will be a vacancy but only one person officially contacted the city to state that they were interested. Sheila Hemming has previously run for Mayor of Morris, was present at the meeting and informed Wohlers of her interest in the position.

Council members also stated that two other candidates had filed for both the mayor and council positions so they would be candidates for the seat. Since Councilman Brian Solvie was not at the meeting, it was decided to wait and get his thoughts before filling the vacancy. Mayor Wohlers said that he was concerned about the message they may send by passing over people who did file and run for the office.

The council members selected Kim Gullickson as the Mayor Pro Tem to lead the meetings in the absence of the mayor. The council members discussed the committees each serves on and suggested switching them up and getting some new faces on the boards. They also reviewed and approved members on several city committees and noted that there are vacancies that need to be filled. These include two on the Library Board, one on the Park Board, one on Community Ed Board and one on the Tourism Board. If any member of the public is interested in serving on one of these boards, they should contact the City Office.

“All of the boards are very important parts of this process,” stated Wohlers. “We appreciate the people who volunteer and make everything work.”