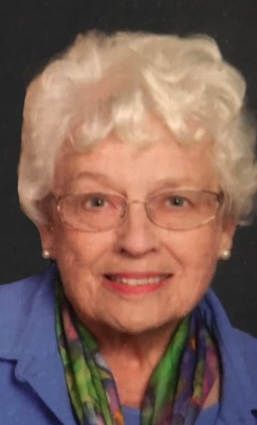 Memorial services for Phyllis Rickmeyer, of Morris, Minnesota, will be held on Friday, July 15, 2022 at 11:00 a.m. at Zion Lutheran Church in Morris, with Reverend Reed Stockman officiating.  Visitation will be on Thursday, from 4:00 to 6:00 p.m. at the Pedersen Funeral Home in Morris and for one hour prior to the service at the church on Friday.  Burial will be at the Fairhaven Cemetery, Fairhaven, Minnesota.

Phyllis Rickmeyer (Lambke) was born July 19, 1932 to Harry and Minna Lambke (Kohn) in Hutchinson, MN. She lost her mother after the birth of her sister Lois. The girls were raised by a new mom, Louise (Dressel) and eventually Terry and Harriet were born.

Phyllis had a happy childhood. She loved living on the farm and won many 4-H trips to the State Fair. Her friends called her “the Canning Queen of Mille Lacs County”.  After graduating in Milaca at the age of 15, Phyllis pursued a teaching degree at St. Cloud State. Amazingly, at the age of 17, she had her first classroom of forty first graders. In St. Cloud, Phyllis met Bill.  After dating for a short time, they became engaged and then Bill left to serve in Korea.  They corresponded by mail for two years.  He had been home just two and a half weeks when they got married on December 28, 1952.  Duane Church, who she considered her best friend, was the best man at the wedding.

Phyllis and Bill moved many times due to Bill’s work. They settled in Morris, where they became business owners.  In addition to raising her family and running the business with Bill, she was civically minded.  She was actively involved in the VFW Auxiliary, Salvation Army, Orphan Grain Train, and the University of Minnesota Morris Gardens.  Phyllis organized the Miss Morris Scholarship contest while she was the Morris Area Chamber of Commerce Director.

Phyllis was a life-long learner.  She was an artist and she believed in the power of the pen.  She maintained the art of letter writing.  She enjoyed writing poems, prose, and stories with her beautiful penmanship. There were colleges in several of the communities where the Rickmeyers lived, and Phyllis took advantage of the opportunity to take classes.  Phyllis finished her BS in education at UMM in 1981.  At that point, her career came full circle as she returned to working in education until her retirement.

Recently she wrote that one of her greatest strengths was patience and “the belief that even if I think I know best, the Lord has the best plans for us”.  Phyllis was a woman of God. Through the years, she was active in the Lutheran Women’s Missionary League.  She was committed to faith formation for children through Sunday school, Wednesday school, and Vacation Bible School.

People will remember Phyllis for her gentle kindness and her love of family, church, community, and her unwavering faith in Jesus.

The children honored to call her, “mom” are Nancy Weidt of Faribault, Sandy Huebner of Hancock, Bill (Vanya) of Esko, Rhonda (Nick) Marchuk of Edina, and Deb (Joe) Peterson of Donnelly.  She is also survived by 12 grandchildren and numerous great-grandchildren. She was preceded in death by Bill, her parents, all her siblings, two sons-in-law, and many wonderful friends who filled her cup through the years.

Pedersen Funeral Home is in charge of arrangements. To send condolences to the family, please visit www.pedersenfh.com.