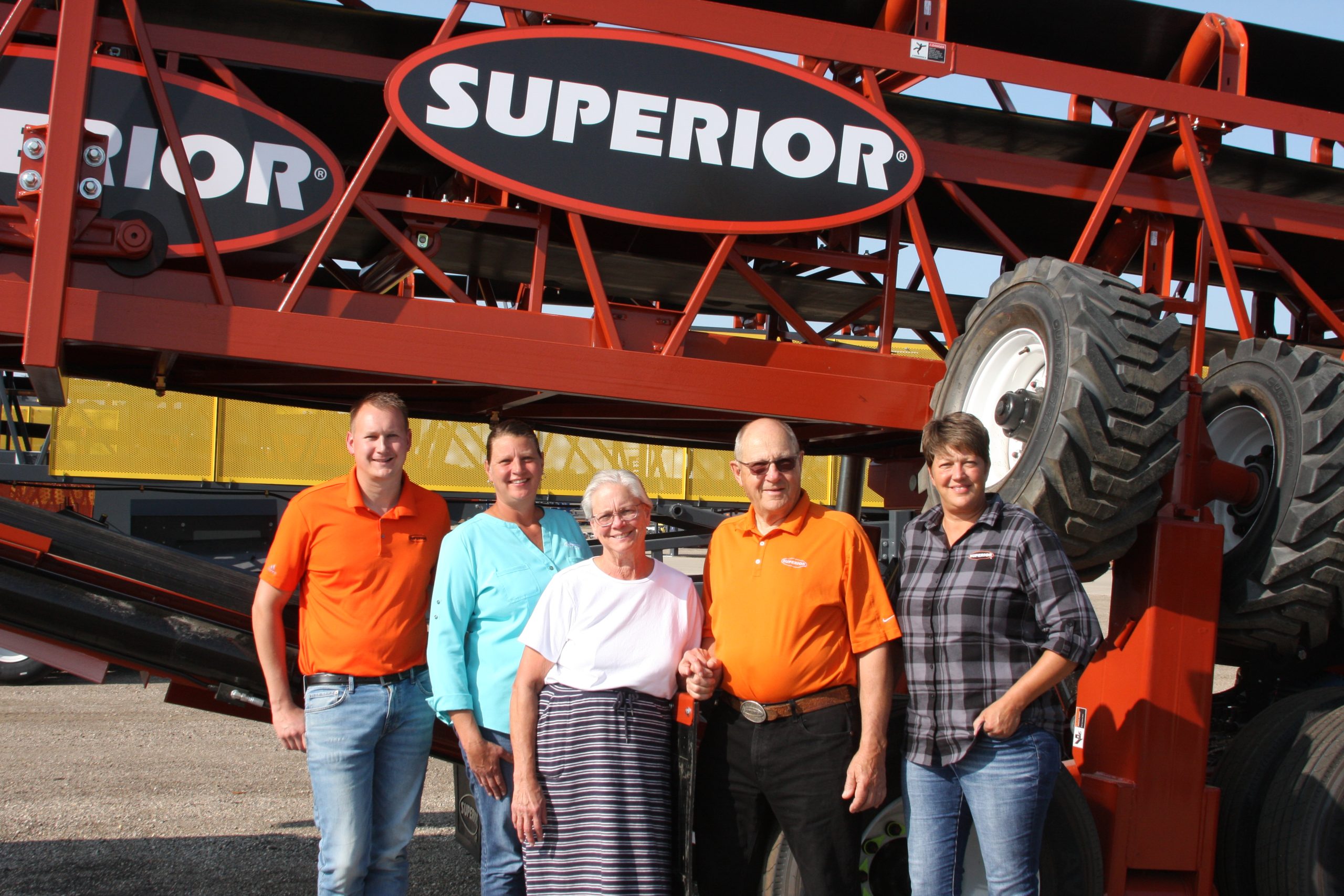 Neil and Linda Schmidgall, along with three of their children involved in the business, will be observing the 50th year of Superior Industries. Just as they have quietly and thankfully built the business, they will be spending the week recognizing the ones who got them here, their employees.

Back in 1972, Neil had just returned from serving in Viet Nam and went to work for his dad, Wayne Schmidgall, at Schmidgall Sand and Gravel in Morris. The business would take stone and gravel out of pits, washing, crushing and sorting in to be used in construction. It was a tough economic time as then President Richard Nixon put price caps on so many products. One of the products the company needed was conveyor idlers. When contacting the company in Kansas about purchasing idlers, they were told “why don’t you just come down and buy the business.” That is exactly what they did and how Superior Industries got its start.

Neil and Wayne traveled to Enterprise, Kansas, made the company an offer which was accepted, and then brought all the equipment back to Morris. Neil set up a small area in the Sand and Gravel shop where he made the idlers needed for conveyor systems. The idlers held the belt that moved the bulk materials out of the pits and into crushing equipment.

In 1976, Wayne sold the Sand and Gravel business to Concrete Minnesota and Neil was able to dedicate all of his time to manufacturing. His business remained in the old Sand and Gravel shop along Hwy 28 in Morris. The business was then named Superior Machinery.

As the years went by Neil added a few new pieces of equipment to the product line and also additional employees. A paint line was added and the company started building conveyors and portable plants. The employees started to include professionally-trained design engineers whose job it was to design the best and most efficient pieces. This was accomplished when a patent was approved for the FD Series conveyor axle, which reduces conveyor setup  time and later the first TeleStacker Conveyor that gained international attention. These two ideas gave Superior access to half of the United States portable conveyor market.

But Superior did not stop there. The company continued to grow and market their products. Eventually sales were being made internationally to places like South America, Africa, Philippines and basically every continent other than Antarctica. HIghly trained employees could visit with a customer, take that information and set up a site with conveyors, crushers and washers as needed to maximize efficiency.

As the company grew, Neil and Linda were also growing their family. They have seven children with four still living in the area. Three daughters are living in Illinois and their son, Paul works at Fresha. Alan, Lisa Tollifson and Mary Erholtz are employed at Superior Industries in various aspects of the business. All of the children were involved in some way through the years even if it involved cleaning, sweeping the parking lot or stuffing envelopes.

Neil is also still active at the company but takes a little of his spare time to create unique items out of discarded parts. Just look for ‘Scrappy’ his statue in front of the Marketing Building (the former Heartland Motors showroom.) His wife and children joke about his ‘dumpster diving’ and some of the things he pulls out and tries to figure out what to make from it. He now has a large rock in front of the building and is trying to come up with some way to use that in his next design.

The growth at Superior will not stop at 50 years. They plan to continue to market their product and research new ideas. They encourage employees to submit suggestions and set a slogan to ‘Build innovation, create opportunity.’

Superior Industries currently has facilities in numerous areas of the United States and even other countries. They have close to 1,400 employees who they term as the company’s most valuable asset.

That is why for the company’s Golden Anniversary they will be celebrating their employees. There will be special dress up days, food trucks at the locations, a Medallion Hunt, gifts and even a steak dinner.

Neil and Linda also want to recognize the community that has supported them in so many ways through the years. In response, Superior Industries has been a supporter and companion to the growth in the community by helping other businesses.

“We can make this community strong together,” Neil stated. “If you travel around the country, you come to appreciate this area that has a lot to offer. We have always tried to establish a good working environment.”