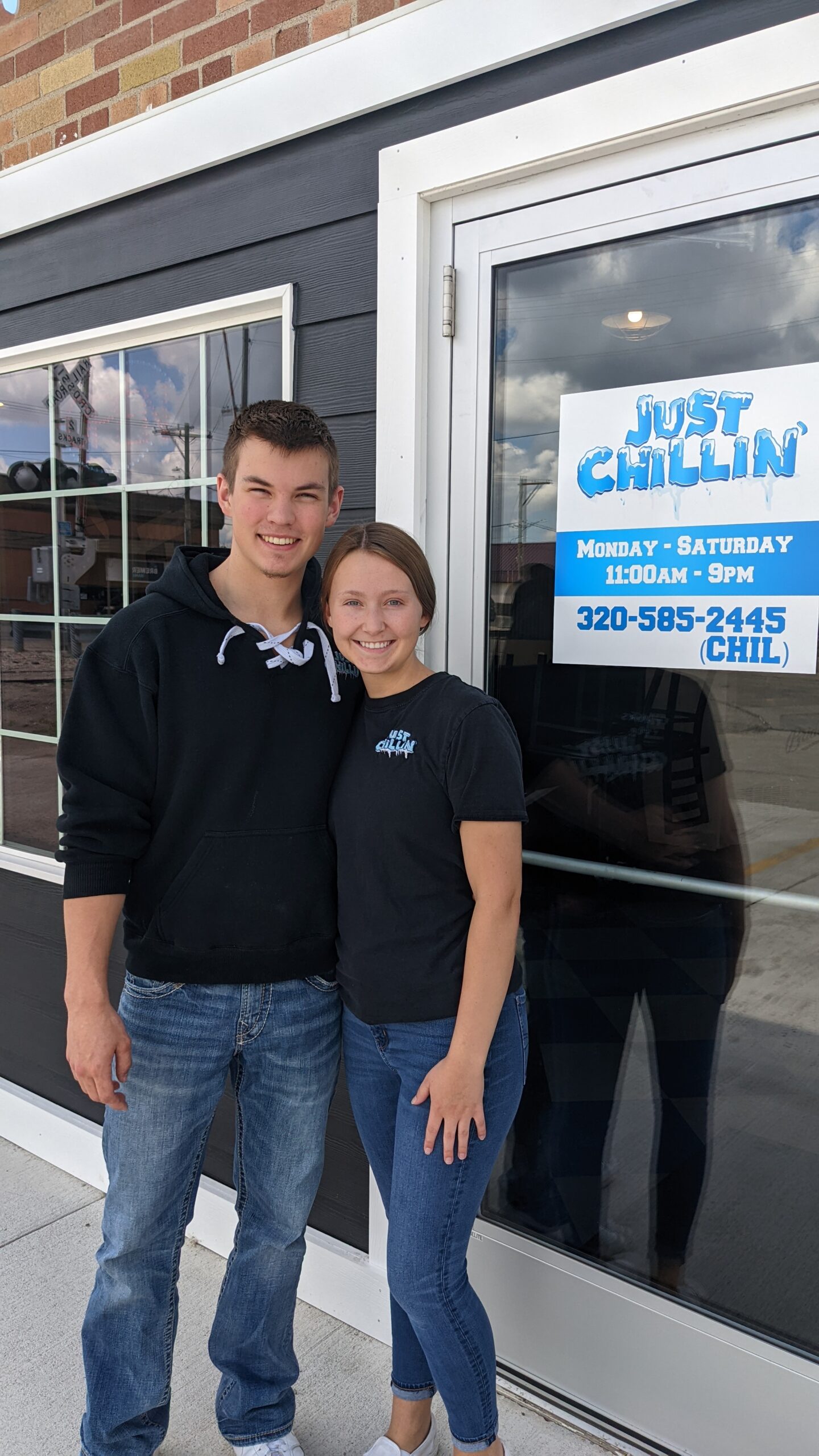 The wait is over… Just Chillin’ opens Thursday in Morris

Community rumblings for over 18 months about a business coming to Morris and serving the popular Bridgeman’s Ice Cream and being located on the west side of the tracks, the wait is finally over. The soft opening for Just Chillin’ will be held on Thursday, June 16, at 23 West Seventh Street, in Morris, right next to Image Xperts.

Of course, since the rumblings began, Just Chillin’ has developed into more than just an ice cream shop. Its location in Benson, which opened in May 2021, is a place to, like the name suggests, just chill. The hope is that Morris, especially with a college like the University of Minnesota Morris and an active community, will be a place where people can chill, socialize and eat good food.

“We are a cross between fast food and full sit-down dining. If people want to come in to order a quick bite and be out the door, we can do that. If people want to come hang out and socialize, use our WiFi, have business meetings here, we can accommodate that as well,” said Terry Timmerman of the Morris location that has a 50-plus seating capacity in various areas of the restaurant.

Terry is the father of Tyler Timmerman, who owns the business with his new wife Brooke (formerly Ellingson).

The goal was to open simultaneously with the Benson location in May 2021, but the timing wasn’t right.

“We didn’t want to rush into opening in Morris just to say we’re open. We wanted to do it right and make sure we had the staff in place to make it successful,” Terry Timmerman said. “Family is important to us and we also wanted Tyler and his very new wife Brooke to have that time as newlyweds before opening a new location.”

“We did mostly all of the work ourselves, which is another reason why it took some time,” Terry Timmerman added. “It was like a part time job that I didn’t need… But the time spent remodeling with our children was priceless.”

Tyler and Brooke Timmerman’s first year in business at the Benson Just Chillin’ location has been filled with waiting for equipment, learning the ropes when it comes to a restaurant, moving into a new home and having a wedding.

“It has been a busy and fun first year… A learning curve for sure,” Tyler Timmerman said. “We’re excited to finally bring this to Morris.”

Just Chillin’ will have a variety of food items on the menu, including brisket, pulled pork, breaded shrimp and chicken strips along with eight different appetizers, which could serve as a meal in itself if ordered as the full pound option.

The Bridgeman’s Ice Cream will be very popular, especially in the summer heat, with several flavors available, including the famous Superman flavor. These can be served up in three different types of cones, a dish or a waffle bowl. Buying by the pint is also an option for those that enjoy a midnight sweet treat.

“We’re looking to add a soup bar during the winter when ice cream probably isn’t as popular,” Terry Timmerman said.

The coffee menu will certainly draw a crowd from Americanos and Mochas to the more traditional Hot Chocolate and Lattes. The Chiller is the signature drink of Just Chillin’, which is essentially a cold brew float – cold brew coffee with a scoop of your choice of ice cream. Similar to the affogato, which is made with hot coffee and is also an option at both Just Chillin’ locations.

The business is located just across the railroad tracks on Seventh Street in Morris next door to Image Xperts. There is parking in front of the building, across the street and also behind the building with a separate entrance in the back as well.

“We’re using Wednesday as not only a physical and mental health recovery day for those that need it, but it will also give us room to do other things, business-related or not,” said Terry Timmerman, who is actively looking at purchasing a food trailer to add a mobility element to the business.

“Wheelin’ Wednesday,” could be coming to the area soon where Just Chillin’ goes mobile for a day and sets up at a specific location for a set amount of time, usually over lunch hour. Having the option to be mobile would allow Just Chillin’ to serve at events like the Stevens County Fair or Cyrus Days.

Watch for an official grand opening this summer to be coordinated with the 25th anniversary year of Image Xperts. In the meantime, stop in to cool off and have a delicious treat on a warm summer day.